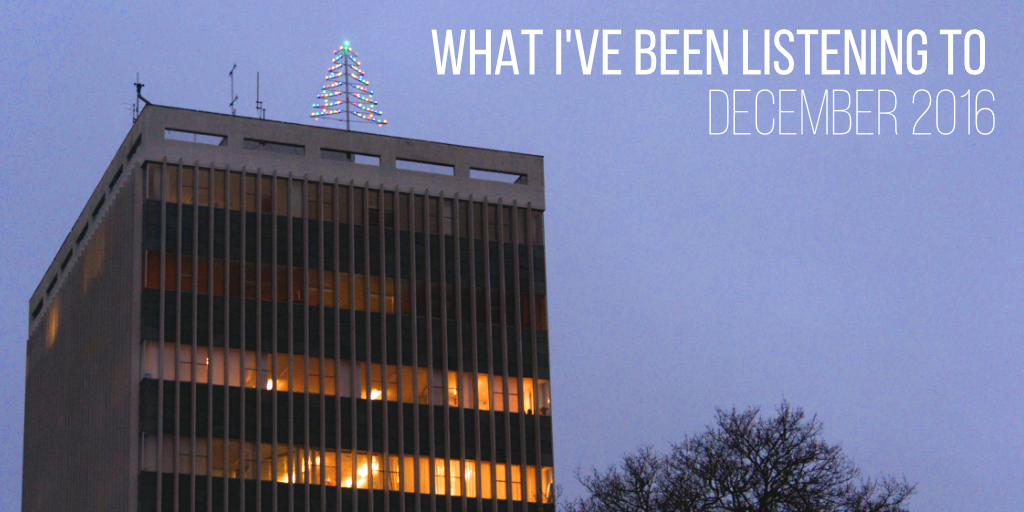 For years I’ve been intending to get a shot of the Christmas tree which sits, festooned with lights, atop the physics building every December. I finally managed it. The upper lit floor is also my vantage point out over Exeter.

Apologies for the tardiness of the post. I’ve been meaning to get it out for a couple of weeks, but unfortunately I’m pretty apt at procrastination. It’s certainly been a hell of year. What with the various questionable bits of politics, scandals, gates of all varieties and now the first year where the antarctic sea hasn’t actually dropped below zero. It’s certainly been pivotal, if not necessarily in a good way. The best part is that winter has yet to properly hit. The temperatures are going to start to fall through the floor over the next month or two, so let me keep you warm with some great tunes.

You weren’t expecting that one, were you? One of my favourite songs ever was ‘Breathe’ by Taylor Swift. I liked it so much that I studied the arrangement meticulously. I studied it so much that I covered it, mixed it and it helped get me an A-level in Music Technology. I loved that song because everything was perfectly arranged and it all just gelled together. You could hear every instrument but nothing felt out of place. And the vocals were sat on top like a perfectly placed cherry atop the cake. I like this song for the very same reason. Everything gels together absolutely perfectly. The arrangement is spot on and the vocals, unsurprisingly given the singers, is to die for. Simply shove this on and enjoy.

If you enjoyed this, then I highly recommend listening to the new album full of remastered material from this super group.

The Sweet – Fox on the Run

The Guardians of the Galaxy franchise has really shown itself to have a great taste in music. It’s nice to see this legacy continue to be upheld just as well with the second helping of this they’ve chosen another great tune from Glam rock history. The Sweet, often known for their ever popular hit The Ballroom Blitz have done other great tunes over the years, and this is one of them. I’m really looking forward to seeing what other classic treats the GOTG Vol. 2 soundtrack has to offer. No doubt it’ll be a great listen.

Sail – The Weight of Gold

Full disclaimer before we get started. The front man of this band is an old friend of mine, but I’m sharing it because they did a great job on this tune. Although not usually the sort of music you’d catch me listening to, these folks have been in the studio for a long time preparing this and it’s certainly paid off. The drums are nice and load and well produced, which is a real bug bear of mine. The guitar riffs are also rather intricate and well produced which I actually really got into at the end and just let it wash over me. I look forward to seeing what lays in store for their full release coming in March 2017. If you like what you hear and want to go and like their Facebook page, it can be found right over here.

The 1975 withe the BBC Philharmonic Orchestra – Somebody Else

Don’t worry, I’m just as confused as you are. This rampant head on collision of two almost juxtaposing styles is so unexpected and yet utterly glorious! This song is probably the finest example from the show, but the whole thing is utterly mesmerising. Somehow both managed to bring the music together into a single amazing package. This song was almost written with shifting chords played on a string section and punctuated French horns in mind. For the most part, the production also manages to wonderfully balance the orchestra and the 1975 so that it all melds beautifully. If you like this the whole show has been uploaded by a few charitable folks to YouTube here.

Note: I tried to embed the BBC Radio One Live Lounge version of this video, but since they don’t serve over HTTPS, it wouldn’t work. If you’d like to see it straight from the source, here’s the link.

Hurts – All I Want for Christmas Is New Years Day

Given the unmitigated depression-fest that 2016 has largely turned out to be, I can think of no finer sentiment to top off my picks of the year with than that offered by the chaps in Hurts in this forward looking festive tune. Okay, it may be a little overkill, but I’m sure you can appreciate the sentiment. The song itself is also very well put together. It’s one of the few times where I’ve heard bells really work in a song. If you wanted a pump up song for new years then you could do worse than to employ this one.

That about does it for this year. Thanks for joining me for my first full year of music picks. I hope to have some science appearing here very soon, but until then, some music will have to do. Thanks again for reading and I hope you’ll join me next month for my first set of tunes for 2017. Until then, stay safe and warm.

Once Again, With More Soul