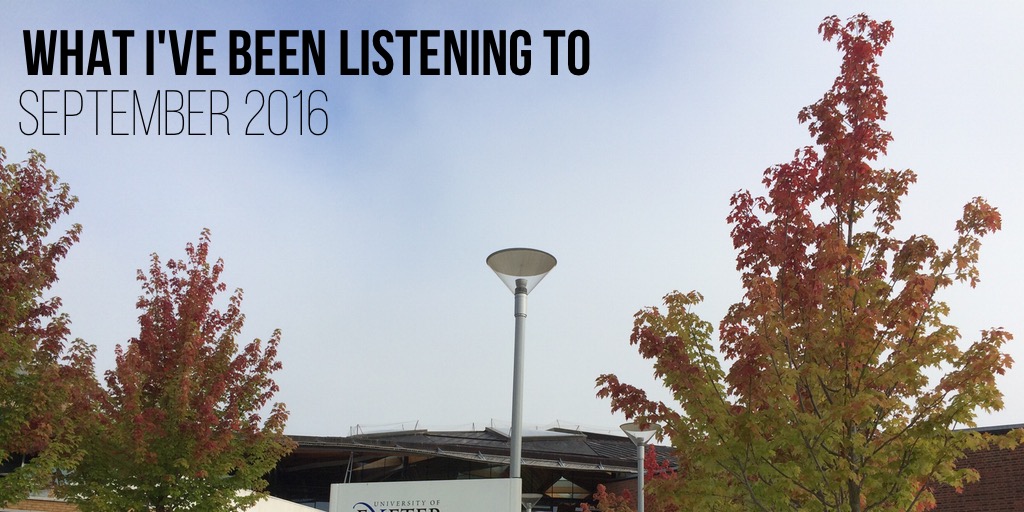 The first hues of autumn are beginning to show on the University of Exeter campus. The end of summer is nigh.

Happy first birthday to these posts. I’m glad to say that the quick purpose meant to bring purpose to my website and motivate me to keep it up have indeed done just that, and I’ve managed to post one per month for the past year… even if no one has read them, it’s still an achievement. We once again dive head first into the new academic year, teaching begins again and the leaves being to turn various shades of orange and red. The autumnal equinox has come and gone, and so we truly are on the meandering downward spiral towards Christmas. I come to you this month festooned with tunes that should hopefully help not let the post summer blues get to you, so here we go with September’s selections.

If there’s one thing that is repeatedly showing itself to be true it’s that the 21st century is actually surprisingly good at doing 80s inspired synthwave. The intricate, synth-based arrangements often felt a little underwhelming back then, due mainly to technological limitations rather than skill. However, that is no such issue for the wonders of 21st century technology. One shining example of both this, and the resurgence of synthwave in mainstream pop, is Carly Rae Jepsen. Along with fellow songstress Taylor Swift, whose album 1989 shot to the top of the charts a couple years ago, she’s crafted two whole albums worth of music that is sure to please any fan of synthpop. A shining example is the first track of her recently released album, Emotion Side B, that may as well be made by an up to date version of Miami Sound Machine.

I Monster – Daydream in Blue

I like to listen to loads of different music. This is a prime example of doing just this. I decided that while working I was going to pop on a playlist of assorted electronic music. It was actually bloody good. This was the first tune on it. Many is the time I’ve heard this song without actually listening to it. It is rather good. I enjoy the rough aesthetic provided by sampling vinyl combined with the modern production techniques. However, the video is pretty freakin’ weird.

You Can Call Me Al (Koloman and Waledt Remix) – ortoPilot

Paul Simon’s Graceland is one of the defining sounds of my childhood. I must have heard the entire album a hundred times. It has that definitive African pop aesthetic with the distinctive boomy bass and intricate, chorus rich guitar that I adore and would love to hear more of. My favourite songs from it are either Diamonds on the Soles of Her Shoes and You Can Call Me Al for this very reason. When I heard the distinctive guitar hook at the start of this cover, I instantly knew the song and it took me right back to it. This is a very good cover and remix in its own right, which is why I really wanted to share it with you.

Once again, in a totally unsurprising turn of events, Christine and the Queens makes a triumphant return to my music-related blog posts. I’m not normally a fan of live covers of songs, as they don’t generally bring anything new to the table that wasn’t covered in the original, however this uniquely Christine re-imagining of Beyonce’s ‘Sorry’ has gone a way to dislodging that opinion. In it’s original form this song is not generally my cup of tea. On repeated listens it has definitely grown on me, but there are far better tunes on Beyoncé’s album ‘Lemonade’. However, this cover is just plain groovy and is covered with a seamless panache that seems to be the steadfast trademark of CATQ. Not only this but it sports a thoughtfully constructed arrangement complete with tastefully placed synth hooks, rich, almost invisible backing vocals, and dance moves that wouldn’t disappoint the late, great Michael Jackson. At this point, I’m really looking forward to seeing more original material coming from this rapidly rising star of modern pop.

Ever since the days of punk rockers and flowers in hair, I’ve been aware of the work of KT. She’s been one of those acts that you know are doing good music, but you never really pay much attention to for one unfortunate reason or another. However, when the first track of her new album came up on Spotify discover I sat up and took attention. From start to finish, it’s a joyous romp through a variety of flavours of soft pop. This is one of the stand out tracks. As you would expect, the arrangement is superb and there are some very nice layered vocals. The music video is also pretty eye catching. If you like this, I definitely recommend checking out the rest of the album.

Although I’m not a massive fan of EDM, I really do enjoy the almost euphoric feeling of a skillfully put together piece of progressive house… this is just that. Taking a tune I already really liked, the stripped down and minimalist goliath of an anthem that is Strobe, and giving it a shiny remix treatment is just what the doctor ordered. The drops all happen at just the right moment and it’s a joy throughout. If you’re a fan of the original, I especially recommend this. In the words of the YouTube comments section, ‘ATTLAS killed it!’

Well, I think that more or less does it for this post. Thanks again for dropping by. I hope to see you next month when I’ll be bringing you more ear candy. Until then, enjoy the autumnal ride.