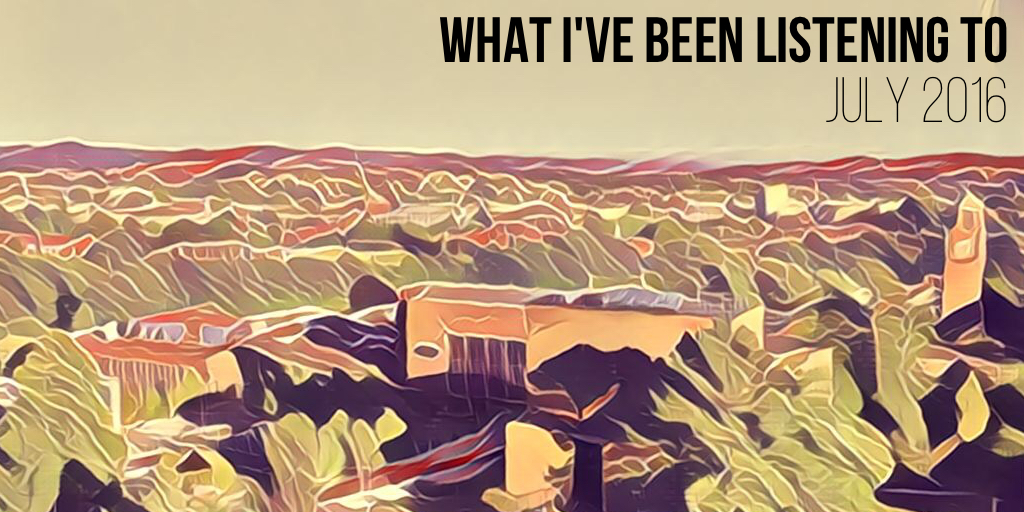 A more abstract than usual view over the city of Exeter. This was taken mid July and run through Prisma, which is a really fun little app.

Welcome to another great instalment of my regular monthly revelry in auditory excellence. This month’s list is unabashedly short and single minded in its focus. Basically, this will probably go down in history as the ‘Sam finds Christine and the Queens month’. So, with this in mind let’s get going on our helpings for July.

I’ve posted about Tone Damli before. She is one of my Scandinavian pop infatuations. After hearing her song Butterflies, I went on a rampage through her available back catalogue. This is one that has stuck with me since then. I dug this up just the other day when I was wanting something to work to. The track itself is pretty catchy and was stuck in my head for quite a while after.

I came across this while doing a little weekend C++ writing. I had it on in the background and accidentally got through the whole album several times. There’s something incredibly genuine about this music that I just can’t put my finger on, and I really like it. This song is just so stripped down, yet so rich it’s hard not to become instantly besotted with it. If the song itself doesn’t do anything for you, then the dancing in the video is simply mesmerising. For the purists amongst you, there is a North American version of this song, but I’ve included the original French version, called Christine, which is simply beautiful. Although my French is poor to non-existent, I’ve been listening to it on repeat. If you enjoy this tune then her debut album, Chaleur Humaine, is sure to entertain and delight.

Update: I’ve listened to this song so much that I have come across the song in its infancy when it was still titled ‘Cripple‘. It was a great song then and it’s a great song now.

This song was mentioned in the Cortex podcast by CGP Grey as a tool that he used to be more productive, and as is usually the way this song just seemed to pop up everywhere for the proceeding week. The bonus of this is that it’s actually quite good, and definitely a good song to inspire you and get the blood pumping. The rest of Rachel’s back catalogue that I listened to is also rather good, but this is a solid pick from it.

A Great Big World are back again with another anthemic tune. This one bears a great message. It’s often the case that it can feel like you’ve been dealt a bad hand in the game of life, but this song charts the stories of 13 people who you could perceive to have had just that, but they are still succeeding at their passions because they ‘won’t stop running’. Tortured metaphor aside, this is a good song with a great message, and a life affirming, smile inducing music video. You should definitely have a watch.

Christine and the Queens & Nile Rodgers – We Are Family

Quite frankly, I’m very surprised this is here. Never before have I seen to so disparate worlds collide so head on and leave such a wondrous path of awesomeness in their wake. Nile Rodgers is simply a legend, and Christine is very rapidly becoming my person to watch for the near future. The audience are loving it and so far the performers. What more could you ask? With my seemingly single minded focus towards Christine and her music this month, combined with being guitarist in a band that actually plays this song, it seems like this was designed to tick my mental boxes. So, enjoy.

Thanks again for joining me this month. I’ll try and make the helping a little more diverse next time, but it is a totally honest reflection of my listening habits this month. Anyway, keep well and I’ll see you in September.