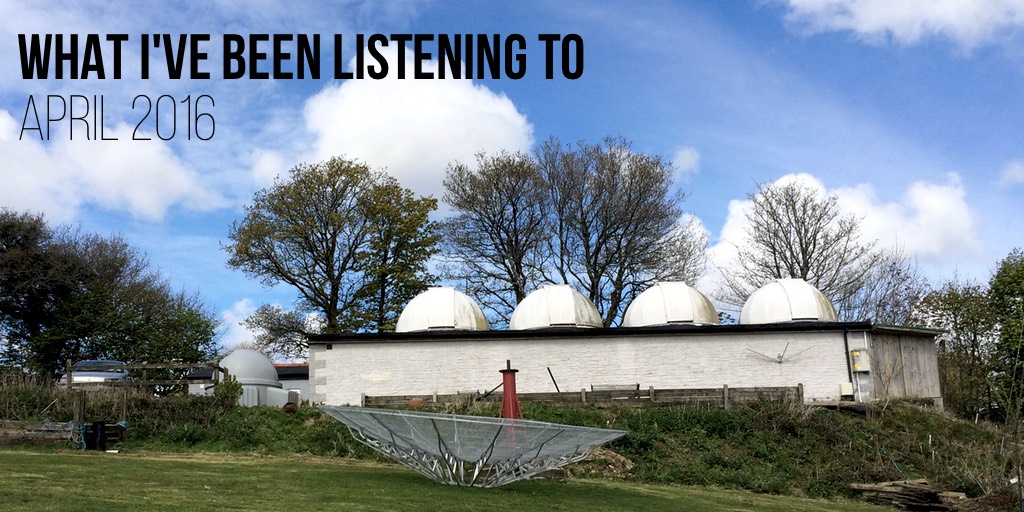 This month there’s been a lot of focus on XRT-C. From planning the final build to beginning construction of the new website. It’s been super busy. This shows a shot of Caradon observatory moments before mounting the dish.

Good day all! Well, the weather this month has almost been as varied as my playlist. No sooner had we settled into our five minutes of summer than torrential rain was battering at our doorstep. At least, that’s my recollection of it. Once again, I apologise for the tardiness of this post. It’s been a busy few weeks, what with all the XRT-C things going on, and the gigs my band are playing this month. No worry, let us get on with the music.

The time has finally upon us. You can finally get at a full Marit Larsen release on Spotify. This particular release is emblazoned with the name ‘Joni Was Right’, and boy is it true. The EP offers a selection of sugar sweet folk-heavy tracks. Vocals wise, Larsen is at her very best with layers of vocals harmonies and deep lyrics. There’s just as much to appreciate from an arrangement perspective. I highly recommend going to listen to this if you like listening to this EPs namesake or any of Larsen’s previous work. It’s sure to enthral.

Frances – Let It Out

This particular single came into my listening way before I was making an effort to do these posts and somehow it got missed off of any post. The arrangement for this tune is super simple. Most of the track has piano, vocals and a bass pad and drum beat snuck in behind… but it really just works. Frances shows of her silky smooth vocals on this track along with her melodic piano playing. From beneath this minimal arrangement, the lyrics and melody of this song really shine through to for a really great piece of contemporary pop music.

Sheppard have been popping up on my radar a lot. Despite the fact that their ridiculously popular hit single Geronimo has yet to really grab my attention, another of their tunes did. This is a catchy, feel-good summer tune, plain and simple. Also, a nice message of unity in a world that seems to be slowly working itself apart doesn’t hurt either.

HAIM – If I Could Change Your Mind

This is an oldie, but definitely a goody. I’m currently waiting in eager anticipation for the tri-sibling superpower from California to drop some more of there sublime brand of 70s / 80s enthused pop. Despite this not being as popular as their runaway hit ‘Don’t Save Me’, this remains my firm favourite from their discography. There’s also some fun dancing in this video.

In between between getting big for being rude (excuse the pun), MAGIC! have been producing some very good reggae fusion. Truth be told their debut album ‘Don’t Kill the Magic‘ is filled with gems, especially if you’re fond of The Police. Although probably the least constrained by the Reggae Fusion moniker, the title track of the album is a damn good listen.

I make no secret of the fact that I enjoy the work of Jack Antonoff. From this work with fun., to his producing work with the likes of Taylor Swift and even down to Bleachers. He has an impressive body of work. One that I only just found out about this month was his old band, Steel Train. Although a radical departure from a lot of his more contemporary work, it still manages to sound distinct as his work. I picked out a personal favourite from their back catalogue to share here.

As much as I dislike the concept of Justin Bieber, it’s hard to deny that he does have some of the best song writers in the world working for him, so I feel no remoorse whatsoever in recommending you listening to this superb Motown reworking of Sorry. If you enjoy this, I highly recommend you follow Postmodern Jukebox on YouTube, as they are reworking more songs in an old-timey style every week. There are some great arrangements in some of them. As for this one, it’s got a real Heatwave vibe to it, and I really like it.

Marion Raven – You’ll Get Up Again

As with Marit Larsen, former bandmate Marion Raven is also infuriatingly difficult to listen to in the UK. To the point where I actually had no idea that she’d done two full albums of material since the last one on Spotify.  This song has a beautiful arrangement, including a driving piano and heaping helpings of string. It even shines in this live recording. It helps that Marion Raven is also a very good singer and songwriter.

I’ve been following Alex G for years on YouTube, and I really enjoyed her eponymous debut album. I only recently found out that she’d recently released another EP. It’s dominated by powerful and emotive ballads, but then out of nowhere kicks in this anthemic pop song. It starts off with an unassuming monochromatic sounding guitar hook and then bursts into full technicolour. The sparkly synths are very tasteful and everything is very well produced. As ever, Alex’s vocals are silky smooth and on form. It’s a very nice piece of independently produced pop.

Eurovision 2016, Woo! Despite not actually watching the Eurovision song contest there were two things I was certain of. The UK was certainly not going to get very far with its drab sounding, apathetic workaday helping, and I wanted Australia to win. This year the Aussies were being represented by a personal favourite of mine, Dami Im. Despite this song fitting the Europop mould almost perfectly, Dami has recently released an album filled with contemporary takes on Carpenters songs which is a breath of fresh air in an otherwise pretty samey sounding arena. Here’s the song that was entered, while its not bad per se, it’s for Eurovision, so it’s more or less what you’d expect.

Mumford & Sons, Baaba Maal – There Will Be Time

I’ve liked Mumford & Sons since ‘Sigh No More’ first hit the iTunes free single of the week back in October 2009. Although I’ve not been religiously following them I have noticed that they’ve been doing some interesting things of late, including shaking things up for their last album, and they’ve released a song with Senegalese musician Baaba Maal. Honestly, when you see how much all of the musicians on that stage are enjoying themselves, it’s hard not to be smitten with this tune.

Thanks once again for joining me for this majorly tardy music update. I hope you’ll join me again next month (well, a couple of weeks really) for some more melodic majesty. Until then, have a great May.