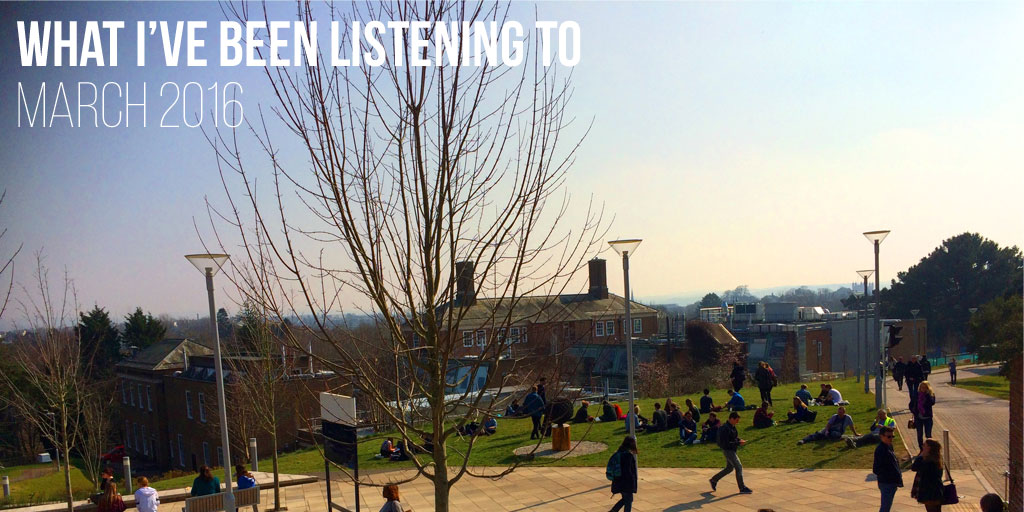 The view from the rear of the Forum building, towards the Hatherly building and out of over the city of Exeter. This was one of the first sunny days of the year.

Oh, so that’s what the Sun looks like? You’d be forgiven for forgetting the look of the ol’ gas ball, but now that the days are drawing out and we’ve entered BST we’re finally on the up for 2016. This month brings another helping of musical magnificence that has been accompanying me through the somewhat stormy month of March. I apologise for this little boody being a tad late (sorry, I couldn’t resist sneaking in a little Devon-ism back there), but I was at a conference last week and I’m still trying to catch up with stuff. You’ll hear more about that in an upcoming post. Anywho, without further ado, on with the show.

The Silent War – Beating of My Heart

Here’s another case of an album I was really looking forward to completely passing me by, and me completely missing it. In this case, I put it down to the excuse that this duo is going by about 3 different names at this point. This glorious combo of Garrison Starr and Adrianne Gonzalez is (literally) like music to my ears. These are some of the finest harmonies that are to be found at the moment, for my money at least. The songs are lyrically excellent and often thought provoking. The music itself is equally rich. If you like this helping, I highly suggest checking out the rest of the album, because there’s plenty more of this.

Another case of an incredibly good bit of Scandinavian pop. This Norwegian pop quartet seem to have been relatively quiet for about 10 years, but have resurfaced with a new single late last year. I’m impressed with this as it’s able to both be incredibly groovy while being amazingly chilled. This song is really well produced, and is served with a helping of lightly crunchy guitar. The music video is also really intense. There’s some breaking of thumbs and blood, so it’s not for the squeamish. Still, I hope this lone single is the sign of a single coming as I’d like to hear some more new stuff from these folks.

I’m not generally a massive fan of franchise-based parodies, but this one is in a sweet spot for me. This is not only a Star Trek parody, which is based on Star Trek: First Contact, my favourite Star Trek film, but it’s also very well made. The singing is pretty much bang on and the video behind it goes with it really well. Thanks to This Week in Trek for playing this on their podcast a couple months ago.

They’ve gone and done it again. For those unfamiliar with the alt-rock / pop / whatever-genre-they-actually-are group The 1975, the released a cracker of a song in 2013 called Chocolate, which was contained on an equally cracker-like eponymous album. They’ve been slowly teasing their new album, whose name I shan’t write owing to it being hilariously long, for the past months and this month it’s finally hit. It actually got unleashed at the end of February, but I didn’t actually listen to it until this month. It might have slipped me by a little bit. Once again, it’s a bit good. Here’s one of my favourite tunes from it.

Status Quo – Raining in My Heart (feat. Brian May)

I make absolutely no secret of my unrelenting adoration of Queen and Brain May, and I also love Status Quo, so when I went for a musical romp through Quo’s back catalogue and found this collaboration on Quo’s 1996 album Don’t Stop I had to have a listen and include it. This cover of a Buddy Holly classic is an amazing melding of two bands and is well worth a listen for fans of either Quo or Queen. Although I’m fairly sure this is just a dub of the studio version of the track over a concert recording, it is quite well done, so I’ll give it a pardon.

This is yet another case of Spotify recommending I listen to something and I persistently ignoring it until I notice that it keeps popping up, at which point I actually quite enjoy it. This is another case of one of my favourite genres grabbing my attention, a genre I’ve come to know as Outrun Synth Wave; the use of 80s style arrangements with modern technologies and some contemporary elements added in for good measure. This is a shining example of that. The whole eponymous album is actually a real pleasure to listen to and I highly recommend taking a listen if you’re into that sort of thing. I particularly like the effective use of vocoders in this. It’s something that can really easily be done incorrectly, but these folks do it really well.

Ever since hearing their excellent single, Happily Ever After, and the excellent album that contains it, My Forever, I’ve been smitten with the pop-rock duo that is He is We, composed of Rachel Taylor and Trevor Kelly. Alas, as is the way with many things, stuff went down and the members of the band went separate ways, along with my hopes of hearing another album from the pair. However, I was very happy to see that Rachel was back in the studio recording a new album as She is We. Her new album finally hit this month and it’s a great blend of contemporary pop sensibilities with a little bit of pop-punk thrown in for good measure. It really suits her voice, which is great because she powers through the entire album with aplomb. Here’s my stand out song, but the whole album definitely merits a listen if this appeals to you.

It’s that time again. Disney have released another one of their Disney Animated Classics line of films and once again they’ve hit the nail on the head. As with Frozen, I had no idea what to expect when I walked into the cinema. Also as with Frozen, I was blown away by how good the film actually was. One its strengths was the song that was done for it. I’m hoping this isn’t going to be another ‘Let It Go’ but I have a feeling we’ll be safe. I do like Shakira, so this being one of her songs was an added bonus.

Thanks again for joining me for another month of summarised music listening. I’m already picking out some top tunes for my next playlist. They unfortunately didn’t quite make it in to March, but might as well spread the wealth between months. I hope you don’t get too caught up in April showers and join me back here next month for some more music. Until then, have a good’un.